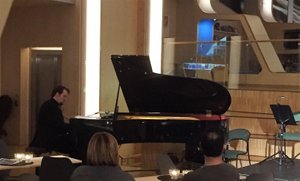 Egil S. Odegard reviewed one of the nine recitals for Agderposten:

Excerpt: "The title "Besessenheit for piano" by Mark Rayen Candasamy (b. 1986) was explained by Haugan Aasland: "The obsession consists of a rhythmical figure which should remain burned in your memory for quite some time!" And the exciting rhythmical theme, and treatment of it, led us through several musical moods. Certain places one can hear the influence of modern American music, as well as the playfulness of neoclassicism. Haugan Aasland once agian displayed impressive technique and musicality."

"Taffelpikene" will once again perform fragments from the musical play "Penguins" at their summer recital in Oslo this June, which will  also feature music from a number of their many innovative projects.

Also, the world premiere performance of "Besessenheit - brooding on Opus 2" from enchanting pianist Susanne Kessel is for a limited time available on Vimeo. Part of the international composition project "250 piano pieces for Beethoven".

Besessenheit ("obsession"), written for pianist Susanne Kessel, will receive its premiere performance in Bonn on May 22nd. The work is part of Kessel's project "250 piano pieces for Beethoven"; a remarkable homage leading up to the composer's 250th birthday in 2020. Subsequently, Erik Haugan Aasland will give the Norwegian premiere on May 31st at Agder University College.

The musical short SYMPHO-NOIR will premiere at the film festival of Cannes, as part of the Short Film Corner program.

From the film's description at sornorskfilm.no: "(...) In the same way an original music score amplifies and supports parts of a film, and moves it into new directions, the music is here moved into new directions through its visual interpretation".

The music is performed by the Kristiansand symphony orchestra conducted by Kai Grinde Myrann, with saxophone solos performed by Tove Nylund. The film recieved an encouraging endorsement from the Norwegian composer's fund (Norsk komponistfond).

Some wonderful news stumbled into my email feed just before the weekend: NOPA (Norwegian union of composers and lyricists) has awarded funding for the production and release of my first EP, based on music composed for the film "Fotspor - Theatre for life" from 2014. I look forward to working on this very personal, reflective, self-researching project, and am overwhelmed by gratitude for the support from my peers at Nopa!

"SYMPHO-NOIR" won the "Best Short Film" award from Sornorsk Filmsenter. Our film photographer Vegard Landsverk was also honoured with a special "Film worker of the year" distinguishment. The dialogue-less film is entirely based on my commissioned piece for orchestra, Sympho-Noir. We now look forward to seeing it in short film festivals in the near future. In the meantime, an excerpt has been authorised for use in the linked newspaper article:

"PENGUINS" has finally had its long-awaited premiere! The children's play, which is a collaboration between the woodwind trio Taffelpikene and author David Sebastian Solli Aasen, tells the story of three penguins on a magical journey to the distant corners of the globe, experiencing different cultures, music, and climates. Performances took place in Oslo and Porsgrunn, and a special preview of the show can be seen on youtube (link below) or via their brand new website at www.taffelpikene.com/pingvinene.

PA SORT LERRET ("On a Black Canvas") marks my third commission from Aust Agder Musical Society. The trio for  flute (Thomas Anderssohn), clarinet (Bjorn Ronnekleiv) and piano (Erik Aasland) was performed in a series of six concerts in September, raising awareness and enthusiasm for the creation of new music all over the south of Norway! An excerpt from the work can be found of my SoundCloud site:

SYMPHO-NOIR, a new piece for orchestra with extensive saxophone solos, was recorded this month with the Kristiansand Symphony Orchestra, Tove Nylund (saxophone), and Kai Grinde Myrann (conductor). The music will form the basis of a new experimental short film crafted in the" noir" style popular in the 1940's and 50' by filmmakers Stephan Hergel and Vegard Landsverk. The commission was generously endorsed by the Norwegian Composer's Fund (Norsk Komponistfond - NKF) and Sornorsk Filmsenter.